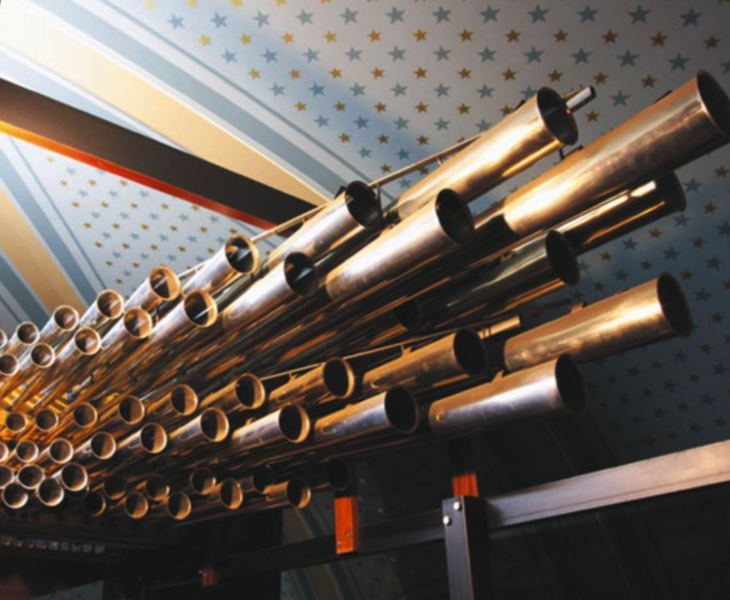 Diego Innocenzi is the resident organist at Victoria Hall and the temples of Saint-Gervais and Vandœuvres in Geneva. He also teaches the organ at the Conservatoire de Musique de Genève and gives concerts all over the world. He has kindly agreed to an interview with AD MAJOREM DEI GLORIAM. We put the spotlight on someone that Geneva can be proud to call one of its own.

AD MAJOREM (AM) : Diego Innocenzi, how long have you been playing the organ in Geneva ?

Diego Innocenzi (DI) : I was lucky enough to be able to play my instrument as soon as I arrived in Geneva, twenty-one years ago. I started working as the organist at the Church of Saint-Antoine de Padoue and I accompanied mass and the choir at the church in Le Lignon, all the while continuing my own musical studies. At the same time, I also played alternately at the temple of Malagnou. Then fifteen years ago I became resident organist at the temple of Vandœuvres, then five years later at the temple of Saint-Gervais and finally at Victoria Hall another five years later. When I finished my training as an organist and choirmaster, I could introduce a few activities in the field of liturgical music. So, after my appointment to the parish of Vandœuvres, I proposed organising a cycle of choir services. It’s an ideal setting for putting sacred music at the centre of the worship as, a lot of the time, this type of music is played in secular venues. Thus, for the last fifteen years, on every second Sunday from September to June, there is a choir service at the temple of Vandœuvres.

At Saint-Gervais, it’s a different matter. The Protestant Church in Geneva have established an open space in the heart of the city to act as a meeting place for all cultural and spiritual activities. I was able to organise original projects such as concerts which join the organ with dance or video, cantata services accompanied by professional musicians, and other musical meditations.

At Victoria Hall, my role is completely different. In my capacity as organist for the City of Geneva, I have a dual mission: to ensure the conservation of the instrument; and to devise the musical programme and develop cultural mediation around the greatest instrument in the city.

AM : Where do you come from Diego ?

DI : I was born in San Isidro, near Buenos Aires in Argentina, in 1971, to a protestant family of Italian descent. At sixteen, I went to my town’s cathedral for the first time and discovered its Cavaillé-Coll organ. The instrument fascinated me. One year later, I got the chance to become the organist.

“ ...The organ, the only concert, The only whine that mingles Heaven and Earth. ”

AM : Sixteen, is that a late age to start a career as an organist ?

DI : There was a previous step that I haven’t spoken about yet. At nine years old, I started playing the harmonium in my church. So I started accompanying hymns very young. I quickly became passionate about sacred music. When I was fourteen, my piano tutor introduced me to J.S. Bach’s organ music and I immediately adored it. The sound of the organ really moved me. Having found out that there were organ concerts each week in Buenos Aires, I started to follow them regularly. My life completely changed once I entered the Conservatorio Juan José Castro where I could work with an excellent professor of piano and sing in a choir of real quality. At the same time, I realised my dream: to seriously practice the organ. After my studies in Argentina, I came to Geneva.

I had the chance to meet Lionel Rogg, a world-renowned organist who has influenced generations since the 1970s and who was my benchmark for years.I met him for the first time at Victoria Hall. I could never have imagined that, seventeen years later, I would become his successor in the same place. He suggested that I enrol in his class the following year.

I nearly fainted... I went back to Argentina where I took my final piano exam and I returned to Geneva, without a scholarship. I had managed to save up 5000 dollars by giving piano lessons. I had worked out that I could manage for five months with that amount!

DI : I remember having a coffee with Lionel Rogg on the day after my return to Geneva, and telling him, with my three words of French, that I didn’t have a “borsa”. He was speechless! Eventually, everything worked out fine.

“ For my part, I’ve spent a number of years working to educate children about the organ. ”

AM : Do you ever regret leaving Argentina ? Do you get homesick ?

DI : Not at all. In the years before I left, my conservatory friends and I used to spend all night dreaming of the different places where we might go to study. We had a huge thirst for culture. Each week I would read a brochure on the architecture of the world’s great churches. Leaving the country was therefore a dream come true. And for four years I have regularly returned to my country where I work for the Argentine government who have hired me as an expert to help in the construction of an organ in the Centro Cultural Kirchner in Buenos Aires. I find it extraordinary that after all these years spent in Europe, I’m able to help my country using the experience that I have acquired. Last year, we unveiled the new instrument. I gave a master class and some concerts, it was a fantastic occasion. I met a new generation of musicians thirsty for culture, just like I used to be. I was therefore very happy to be able to meet their expectations.

“ For my part, I’ve spent a number of years working to educate children about the organ. ”

AM : Like many organists, do you accompany your teaching and concert activities by providing your technical expertise ?

DI : That part is an additional skill which is improved gradually. I have always stayed in close contact with organ builders.
The way in which the instruments are improved fascinates me. As a musician, you must sometimes forget about your personal tastes when you are helping to create or revive an instrument. You must also take into account the expectations of other interested parties: parishes, organists and the public. So I recently took part in the restoration of the organ of the church of Sainte-Clotilde, at La Jonction. It is a romantic organ complete with cutting edge technology. I also started the construction of a Spanish- style organ at the church of Saint-Julien de Meyrin, an instrument which Geneva had been lacking. Finally, I advised the restoration of the organs of the temple of Cologny and the church of Notre-Dame des Grâces in Grand-Lancy.

AM : Are these projects another way of giving something back to Geneva ?

DI : You could say that, yes. Every time I made a proposal to the city, I always met someone that helped me to achieve my idea. This allowed me to form strong professional relationships and lasting friendships.

AM : And it doesn’t stop you from regularly getting away to tour all over the world ?